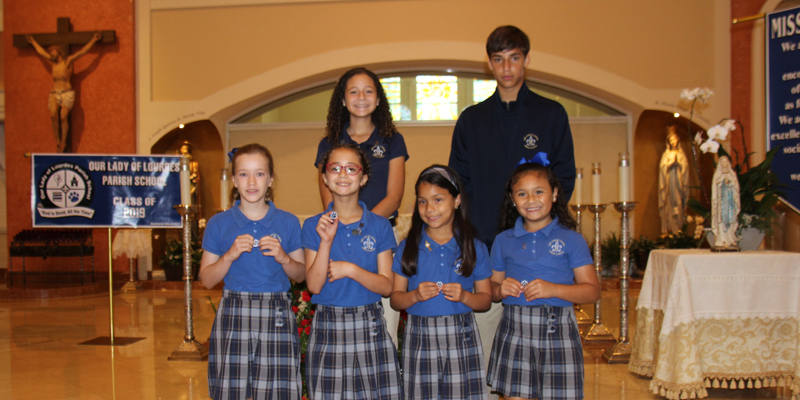 In the fall of 1995, the parish family, under the guidance of our Pastor, Reverend Anthony J. Massi, began the process of building a new school. Construction of Our Lady of Lourdes Parish School started in the spring of 1996; the doors were opened for students on August 21, 1997. With Dr. Maria Avellar-Fleming as the founding Principal, the school initially had a total of sixteen classrooms, offering classes from pre-school to fourth grade, accommodating 170 families, 226 students, and 25 staff members.

The spiritual goal of the school from the start has been to provide its students the opportunity to develop their life in Christ through religious instruction and the practice of their faith so that they may receive the Sacraments of the Roman Catholic Apostolic Church. The ultimate goal of Our Lady of Lourdes Parish School is to provide a balanced environment of prayer, and prepare students for their future life as a “New Generation in Christ.”

The building of additional classrooms began during the year 2000. Expansion of additional grades has been continuous. In the spring of 2002, the school graduated the first eighth grade class.

Thanks to the tireless efforts of administrators, teachers and staff, the Home and School Association, Homeroom Parents and volunteers, the school holds an excellent reputation in the “Three A’s”: Academics, Athletics, and Arts. The school provides a strong academic curriculum and an exemplary Physical Education and Arts program.

The school has grown dramatically in its short existence, creating the need for additional members of the administration and staff. In August of 2000, with 433 students enrolled, Mrs. Marilyn S. Bimonte joined the school as the Assistant Principal. Additions to the physical plant were also made.

On March 5, 2004, the school dedicated the new track and on October 19, 2005, a baseball field. This expansion was a wonderful enhancement to the physical education and competitive sports program.

Upon Dr. Maria Avellar-Fleming’s resignation in the spring of 2004, Mrs. Marilyn S. Bimonte became the Interim Principal for the school year 2004-2005.

Mr. Thomas E. Halfaker was appointed Principal of Our Lady of Lourdes Parish School in July of 2005. The school’s enrollment was 402 families, 622 students and 61 staff members. Mrs. Laura G. Sanchez joined as the Assistant Principal in the 2006-2007 school year, when the school nearly reached its capacity with 652 students and two classrooms of each grade level from Pre-K3 to 8th grade.

During the 2007-2008 school year, the school began its initial accreditation process. The eighteen month process was a joint effort between the administration, staff, students, parents, and parishioners. It was completed in April of 2009. The Florida Catholic Conference fully accredited the school in July of 2009.

A historical moment for our parish took place in October, 2009, when our Pastor was appointed Bishop of the Diocese of Pueblo Colorado. Bishop Fernando Isern's ordination took place on December 10, 2009 in Pueblo Colorado. We bid farewell to Bishop Fernando Isern and extended a warm welcome to our new Pastor, Msgr. Kenneth Schwanger, who came to us from St. Jerome Parish in Fort Lauderdale. He commenced his duties as our Pastor in January, 2010.

Under Msgr. Kenneth Schwanger's leadership, our parish continues to grow as a faith based community. Many new ministries have been developed to faithfully serve the needs of the growing community. Renovations and improvements have been made to our church and school grounds.